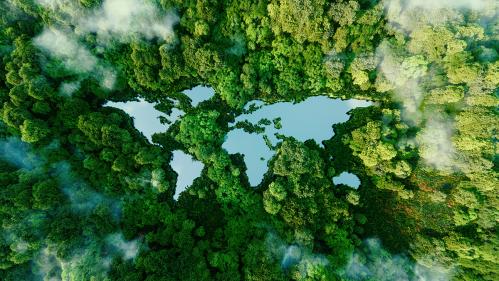 Rutgers Innovation Ventures has executed an exclusive license between Rutgers, The State University of New Jersey and the startup RenewCO2.

“Climate change is one of, if not the most pressing issues of our time, and the team behind RenewCO2 is working to be a part of the solution,” said Tatiana Litvin-Vechnyak, Associate Vice President of Innovation Ventures, the academic technology transfer unit within Rutgers Office for Research that facilitated the exclusive license between the university and RenewCO2. “To take on the task of solving the issue of carbon dioxide is no small feat and Innovation Ventures is proud to have done our part to help RenewCO2 advance its mission closer towards commercialization.”

Formed in 2018, RenewCO2‘s goal is to develop clean electrochemical processes that convert CO₂ into monomers and other organic chemicals in order to shift the chemical industry from a greenhouse gas emitter to a consumer of carbon dioxide. Different from traditional fossil-derived feedstocks and current bio-to-plastics processes, the company’s process is carbon negative. RenewCO2 was founded by Anders Laursen, former post-doctoral associate at Rutgers, Karin Calvinho, who received her PhD in Inorganic Chemistry from Rutgers, and Charles Dismukes, Distinguished Professor in the department of Chemistry and Chemical Biology at Rutgers School of Arts and Sciences.

Prior to facilitating the exclusive license for RenewCO2, and while the technology was incubating in a Rutgers lab, Innovation Ventures helped develop an intellectual property strategy in close collaboration with the innovators. Additionally, Innovation Ventures provided much-needed early funding support and feedback on the commercialization plan through the university’s TechAdvance® program, an early-stage technology fund that provides financial support and business expertise for Rutgers faculty and students to advance promising technologies toward commercialization, and the company also participated in the Rutgers' I-Corps Site program (which has since become part of I-Corps Hub Northeast Region). The company also received funding from the NJ Commission on Science, Innovation and Technology, $75 thousand for a Clean Tech Research & Development Seed grant and $25 thousand for an SBIR/STTR Direct Financial Assistance grant.

According to Energy Transition Ventures, with chemical production lending to more than 15 percent of global industrial greenhouse gas emissions, RenewCO2 has secured a licensing deal to scale its novel catalyst technology to capture carbon from hard-to-abate sectors and transform it into a feedstock for carbon-negative, plastic monomers at a fraction of the cost of plastics derived from fossil sources.

The startup has raised $10 million in venture investment and grant funding, including a pre-seed round of over $2 million led by Energy Transition Ventures, a venture capital fund manager headquartered in Houston, Texas, investing in early-stage startups that benefit from or drive the energy transition. These developments put RenewCO2 on track to commence construction of its pilot and reach commercialization by 2025.

"Converting CO2 directly into negative carbon products is a game changer for the climate. With low-cost renewable power, combined falling costs and advancements in electrolysis, the RenewCO2 novel catalyst and eCUT process has the opportunity to be world-changing," said Neal Dikeman, co-founder and partner of Energy Transition Ventures. "RenewCO2 is completely rewriting how we make plastic and chemical products and how these industries will handle carbon emissions without a high price on carbon or credits. We are excited to make CO2 and renewable energy the low-cost chemicals feedstock of the future, not the present pollutant."

According to RenewCO2, the Electrocatalytic Carbon Utilization Technology (eCUT) process uses just water and electricity to effectively convert CO₂ to monomers, which can then be used for industrial processes to create carbon negative products.

Led by Calvinho and Laursen, the RenewCO2 team has extensive experience in research, development, and testing in various areas such as catalysis, electrolyzers, electrochemistry, and materials science. According to its website, the company has repeatedly demonstrated its novel catalyst can essentially mimic nature's route to reducing CO2 with efficiencies that far exceed those of natural systems by chemically transforming carbon dioxide into chemicals at unprecedented high energy efficiency and selectivity in a single step. The catalyst has also received broad peer-review attention and several awards, including features in The Royal Society of Chemistry's Energy & Environmental Science journal and the Journal of the American Chemical Society.

"When I came to the United States to pursue my graduate degree, I was sure I wanted to advance research in catalysis for renewable energy. When we discovered our proprietary catalyst, I knew we had the opportunity to reverse global carbon dioxide levels at a mass scale," stated Calvinho, chief technology officer of RenewCO2 and a U.S. Department of Energy (DOE) Chain Reaction Innovations Fellow at Argonne National Lab. "With the potential to decarbonize chemicals, refining, power generation, biofuel production, and many other CO2-emitting processes, we are determined to change the way polymers are made by displacing fossil carbon resources while using renewable energy sources and making sustainable products."

The plastics industry alone is responsible for at least 232 million metric tons of greenhouse gasses annually in the United States. With climate change rapidly intensifying, the social urgency to remove CO2 from the atmosphere is driving the petrochemical and chemical industries' decarbonization efforts with attention from stakeholders and regulatory bodies. Such manufacturing point sources, and direct air capture projects are ideal for supplying RenewCO2’s modular, scalable eCUT electrochemical conversion process. Captured CO2 can be converted selectively into a range of demonstrated products in a single unit, including the precursors for various plastic materials such as monoethylene glycol (MEG), methylglyoxal, and furandiol. Such plastics and polymers are foundational to manufacturing electronics, appliances, plastic bottles, food containers, textiles, and more.

"Plastic is essential to our society," said Laursen, CEO of RenewCO2. "Our innovation was replicating nature's process for making oil and gas over millions of years but doing so in a fraction of a second. More importantly, the eCUT process goes from CO2 to valuable products in a single energy-efficient step, not just conversion to CO or syngas. By harnessing CO2 as the feedstock and building on the rapidly growing field of electrolysis, we can provide companies with an extremely sustainable replacement to fossil fuels when it comes to creating plastics."

Previously, the company was awarded a $225,000 grant from the National Science Foundation and a $1.15M in research and development funding from the DOE for its various solutions in utilizing carbon emissions to promote decarbonization in the production stages of the chemical industry. Most recently, it announced an additional $200,000 from the DOE.